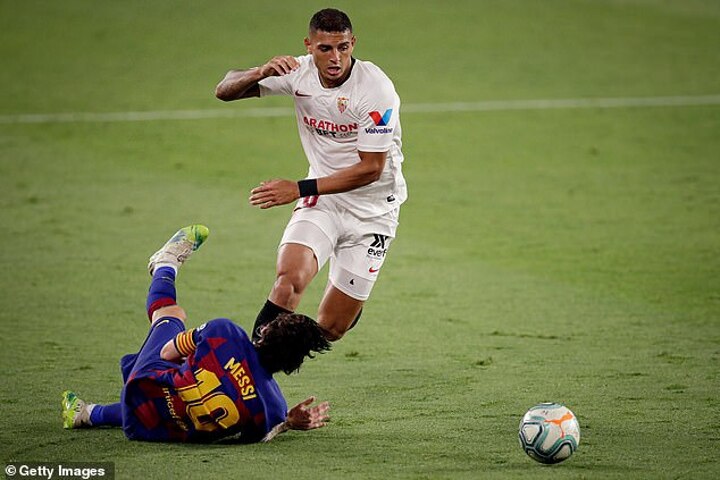 Attention in the Brazilian has skyrocketed off the back of a promising debut season in La Liga football.

Sevilla signed the pacey defender, who can play centrally or at full-back, from French club Nantes last summer for £13.5million (€15m).

A huge £68m (€75m) release clause was immediately inserted into the contract of the 27-year-old, though Liverpool and City are now reportedly set to challenge the Spanish club’s resolve.

Spanish publication Marca claim both Jurgen Klopp and Pep Guardiola want to add the Brazilian to their ranks, ahead of next season’s battle for the Premier League title.

Despite the release clause, Sevilla are renowned in European football as a selling club, and are said to be willing to listen to offers.

Recently crowned Spanish champions Real Madrid, along with Bayern Munich, have also been linked with the player.

After qualifying for next season’s Champions League Sevilla have no obligation to sell, though a potential deal could offset some of the financial implications caused by the coronavirus pandemic.

Likewise, Sevilla sporting director’s Monchi is known for his ability to sell star players at huge profits whilst maintaining his club’s level of sporting performance on the pitch.

Carlos first moved to European football from Brazil in 2014, making his bow on the continent with Portuguese club Estoril and then with playing for FC Porto’s B side.

He later secured a move to France in 2016, where he impressed for three seasons with Ligue 1 side Nantes.

So far this season he has featured in 31 matches for Sevilla, scoring twice.