Zinedine Zidane repeated the mantra ‘we still have not won anything’ over and over again, in his pre-match press conference on Wednesday. He knows only complacency can stop his Real Madrid team winning LaLiga now. 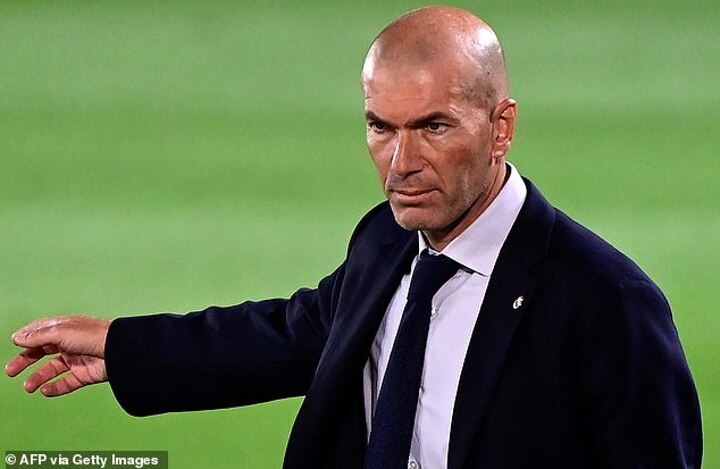 He also knows that if he guides Real Madrid to what would be only their fourth league title in 12 years, he might just finally get the recognition that the three Champions League successes never brought him.

‘I have experienced this as a player,’ he said. ‘We have won nothing. Nothing. And the players know that.’

Madrid will be four points clear with five games to play if they pick up a victory against Getafe tonight and Zidane guardedly shot down every suggestion the title was within his grasp already.

‘We know that the recuperation will be even more important now that we have the heat,’ he added. ‘It’s not just a case of resting a bit between games.’

Madrid have returned in better form than even Zidane could have imagined. They are the only team to have won every match they have played since the restart so far. Zidane has incorporated everyone, even given minutes to James Rodriguez and Gareth Bale.

He doesn’t need to just call on his past experience as a player to try to protect the players from complacency – he can cast his mind back to March when Real Madrid came out of a 2-0 win over Barcelona, with all but the crown on their heads.

Things soon changed when they were beaten 2-1 away to Betis in their next game and Barcelona moved back to the top. Now he wants no more slip-ups.

Those who saw him post-game in the Real Madrid dressing room after they beat Eibar in the opening game back say he was uncharacteristically agitated, having seen the way his players switched off in the second half.

The run-in is not without its pitfalls and games away to Athletic Bilbao (the match that follows the visit of Getafe), and Villarreal in the second-last matchday, will be tough.

So far though, his team look stronger than so many of their rivals and the fact that they are the only club to have picked up maximum points reflects that.

The role of fitness coach Gregory Dupont has been significant and to Zidane’s huge credit. The physio, who managed France’s success in Russia at the 2018 World Cup, was signed by Madrid at the start of this season on Zidane’s advice.

He had returned to the club but did not want his previous physio, Antonio Pintus, working with him into the new season.

Pintus had prepared the players during those three straight Champions League successes, but Zidane had not liked the fact that when he left the club in 2018, Pintus was the only member of his staff who did not leave with him.

Zidane also wanted a more physically powerful Madrid – that much was clear with his signing of Ferland Mendy to eventually replace Marcelo, and the fast-tracking of Fede Valverde. Dupont’s France had picked up no injuries in Russia and had been one of the fittest sides at the World Cup.

Dupont has been a huge success and one that can be accredited to Zidane, the manager, who takes care of everything.

Part of the reason he really wants this league, more than another European Cup, is that it will mark him out as a great manager; not just someone who pings perfect 40-yard passes to his players in training and then picks the XI on a matchday.

His squad management has been faultless to date. As has his leadership of the team in their new temporary stadium.

Building work at the Santiago Bernabeu has meant his team have had to play their remaining home games at their B-team’s 6,000 capacity Alfredo di Stefano stadium, situated in the club’s out-of-town Valdebebas training ground.

It might have worked against them with the smaller arena less imposing than the Bernabeu, even under current conditions with no fans.

But with specially organised matches on the surface, arranged to kick-off the same time of some of the games, the team have looked relaxed in their new environment, strolling down the hill from their Valdebebas accommodation to the stadium but then up for putting in the performances to win their first five games back.

‘Eighteen points is still a lot to play for,’ Zidane said on Wednesday. With Barcelona wilting somewhat he knows he might need less than that to get the team over the line, but he’s not letting on to anyone.

He wants the maximum, for three more weeks.

No one knows where i will be next season, says Zidane

Zidane wants Messi to stay at Barcelona amid exit rumours

“Hazard is essential, but we must go slowly with him” – Zidane

The referees are not giving Real Madrid any special treatment – Zidane